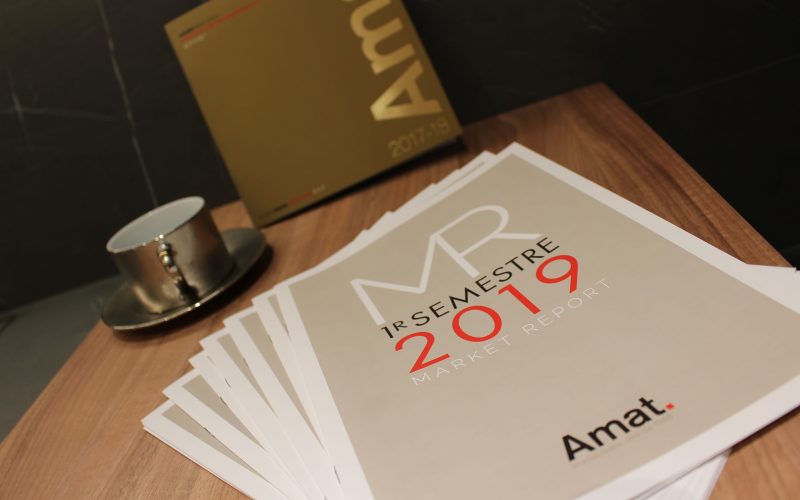 Last October, Guifré Homedes, General Manager of Amat, presented the semi-annual property market report of Barcelona. It collects data extracted from the company in relation to rental and sale, both second-hand and newly-built, as well as the luxury real estate market in Barcelona and municipalities on the outskirts such as Sant Just Desvern and Sant Cugat.

During the presentation, which took place in the new office of Amat Luxury in Barcelona, Homedes explained that the sale of new apartments in Barcelona and its surroundings has been positive during the first semester of 2019, as the Catalan company has noticed an increase, albeit moderate, of 2%. In addition, compared to last year, it has generated a 9% more in volume of sale, that is to say, it has sold more and the price has been slightly higher.

With regards to the sale of second-hand properties, whilst Barcelona has experienced a drop of 8%, areas such as Sant Cugat and Sant Just Desvern remain attractive for investors and sales have increased a 10%.

The compiled data for this property market report of the first semester of 2019 points outs that the age of customers who buy a property is increasing. Homedes made clear in relation to the matter that the buyer’s profile is that of the local buyer, with an average age of 40 years-old and coming from the rental market.

In the case of the luxury real estate market, sales figures are not very high, but they are significantly better than in the same period in 2018. The request for single-family homes for sale in Sant Just Desvern and Sant Cugat is more active; whereas, the demand of luxury apartments for sale in Barcelona is less constant. In any case, we are talking about buyers who are clear about what they want and how much they want to spend, so they take some time to find it.

Rental trends in the property market Barcelona and its metropolitan area

Homedes confirmed that “despite the idea of pessimism that seems to exist in the market, we have maintained and even increased slightly; the feeling of pessimism seems to affect more to the market than to buyers”.

Earlier this year, Amat foreseen that the rental market will experience a recovery of its offer and, consequently, an income stabilization. However, this has not happened for two main reasons: the lack of offer due to delays in the hand over of apartments (both, newly-built aimed at rental and renting properties) due to administrative issues or lack of supplies and the insecurity that have generated in the client the different electoral processes and changes in the Mortgage Law.

Notwithstanding the above, in this first trimester of 2019, the average time in renting an apartment in Barcelona has improved, being only 4 months, when before it was longer. Moreover, Homedes states that rents in Barcelona cannot increase more. In general, in order to experience better figures of the rental market in Barcelona and surroundings, we can only hope that the supply of properties has improved during the second semester with the hand over of brand-new projects and the freeing of rental properties.

If you want to read the complete report, click the following link.